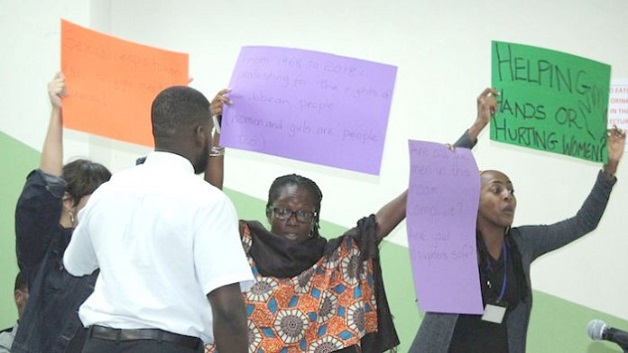 “We are in solidarity with our sisters across the region… Justice for all!” was the cry that rung out last night as placard-waving protesters disrupted a public lecture by this country’s Prime Minister Dr. Ralph Gonsalves at the University of the West Indies, Cave Hill Campus in Barbados.

The protest came in the wake of recent controversy and criticism over the handling of a case involving 22-year-old former model Yugge Farrell who is charged with using abusive language towards the wife of Finance Minister Camillo Gonsalves.

In January, Farrell, was sent to the mental health centre for evaluation.

The protesters, UWI lecturer Dr. Kristina Hinds, public relations officer of the National Organisation of Women-Marsha Hinds and Luci Hammans of the Life in Leggings movement, made reference to the case, calling for “justice for Farrell” and demanding “an end to nepotism”.

“We do not like the abuse of power. We will not show deference to politicians or prime ministers because we are in solidarity with our sisters across the region because women’s lives matter too,” declared Hinds as she and other protestors held their signs aloft and university security officials tried to intervene.

“We don’t just want to help with natural disasters. We want to help ensure our political system guarantees justice for all,” she added.

A report by the Barbados Nation News said Prime Minister Gonsalves responded by saying he would be willing “at some appropriate time” to meet with the protesters to discuss their concerns.

The protest went on for about ten minutes before the women left the lecture theatre in the company of security officials.

No room for complacency says Minister of Health