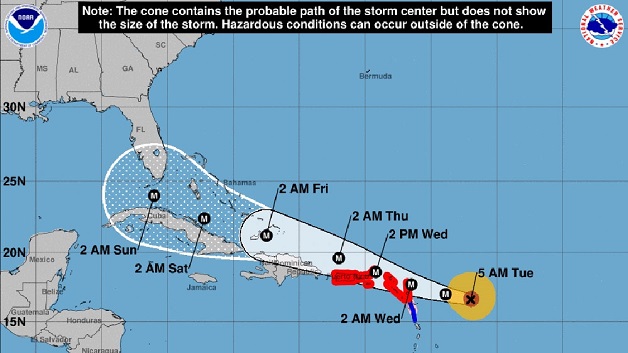 Hurricane Irma, now an extremely dangerous category 5 storm, is plowing toward the Leeward Islands and southern United States today as islands in its path brace for possible life-threatening winds, storm surges and flooding.

Hurricane warnings and watches were in effect for parts of the Leeward Islands, the British and U.S. Virgin Islands and Puerto Rico, in preparation for a storm that was intensifying, the U.S. National Hurricane Center (NHC) said.

At 11am today, Hurricane Irma was about 225 miles east of Antigua. It is moving toward the west near 14 miles per hour, and this general motion is expected to continue today, followed by a turn toward the west-northwest tonight. On the forecast track, the extremely dangerous core of Irma is forecast to move over portions of the northern Leeward Islands tonight and early Wednesday.

According to the Antigua Observer, reports from an Air Force Hurricane Hunter aircraft indicate that the maximum sustained winds are near 180 miles per hour with higher gusts.

Once the storm clears the Leeward Islands, the violent winds are expected to affect the British and US Virgin Islands along with Puerto Rico. After that, Hispaniola, Cuba and the Bahamas could also feel its impact.

Government grants the approval for a half holiday tomorrow