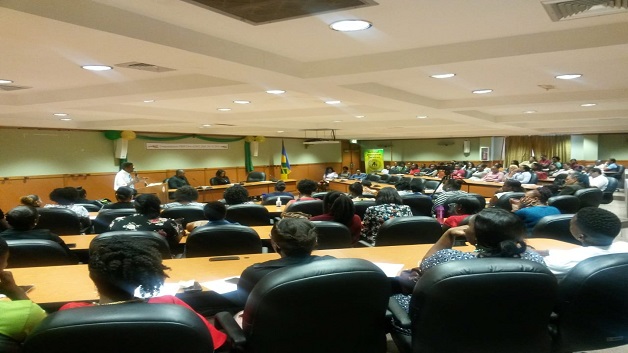 Three batches with a total of one hundred and thirteen public servants received certificates of completion after successfully completing the Public Service Development programme for the period 2015 – 2018.

The programme lasted six months and covered a variety of aspects within the public service.

The closing ceremony for the programme was held at the National Insurance Services (NIS) Conference Room on Friday, November 23, 2018 under the theme: “Reach for the stars while serving from the heart.”

Chairman of the Police and Public Service Commissions, Cecil “Blazer” Williams in his feature address said the surest way to fulfilling one’s ambition is to extend and develop one’s knowledge about the work being done. He urged public servants to persevere to gain success and encourage graduates to build an environment of love not favoritism.

Acting Chief Personnel Officer – Mrs. Arlene Regisford-Sam said the programme was geared at providing knowledge on the regulations and general functions of the public service and successful participants must at least have a pass mark of seventy percent. She said the goal is to create a higher level of maturity and strength of character.

A new programme aimed at rehabilitating former prison inmates to be implemented here this...