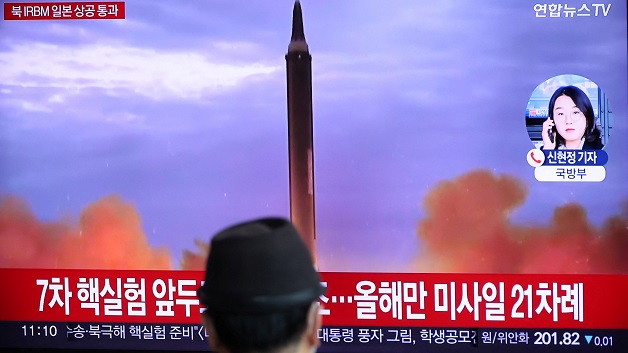 North Korea has fired a ballistic missile over Japan, in what appears to be a deliberate escalation to get the attention of Tokyo and Washington.

The missile travelled 4,500km (2,800 miles) before falling into the Pacific Ocean – far enough to hit the US island of Guam if it took another trajectory.

It is the first North Korean missile launch over Japan since 2017.

Japan issued an alert to some citizens to take cover. The US and South Korea responded with joint bombing drills.

The South Korean Joint Chiefs of Staff said four aircraft from each side had taken part in the exercise, firing at a mock target on an uninhabited island in the Yellow Sea. A statement said the drill demonstrated Seoul and Washington’s will to respond sternly to the threat from Pyongyang.

The UN prohibits North Korea from testing ballistic and nuclear weapons. Flying missiles towards or over other countries without any pre-warning or consultation also contravenes international norms.