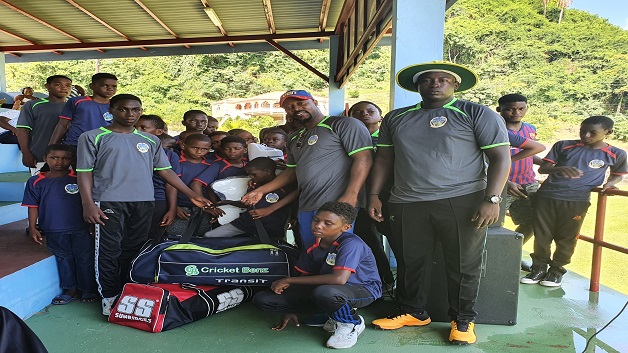 North Leeward will see significant enhancement to sporting facilities in the coming months, according to Carlos James, the Unity Labour Party’s caretaker for the constituency. James made this declaration while delivering remarks at the launching of the Jules Anthony Cricket Academy at the Cumberland playing field last Saturday.

According to James, major upgrades to hard court facilities in Rose

Bank and Fitz Hughes are expected in the coming weeks, which will complement the recently constructed Rose Hall Multi-purpose Sporting Facility.

James told participants at the launching that there are further plans to complete a playing field in Troumaca, while rehabilitative work is earmarked for the Petit Bordel playing field.

“We have invested substantial resources in developing sporting facilities in North Leewward. Look at the quality facilities in Cumberland and Golden Grove at a combined cost of over 1 million, the recently completed Rose Hall multi-purpose sporting facility at over quarter million and Rose Bank and Fitz Hughes hard courts will see immediate remedial works of close to quarter million dollars in the coming weeks.

These new facilities, including Rose Hall, Cumberland and Golden Grove and remedial work to existing facilities are well over 1.5 million nearing 2 million dollars in terms of infrastructure development and we also have to budget for Troumaca and Petit Bordel playing fields. James said.

The ceremony also heard remarks from the area representative, Roland

Man dies after being stabbed in La Croix

WICB to host a charity match for Dominica later this month