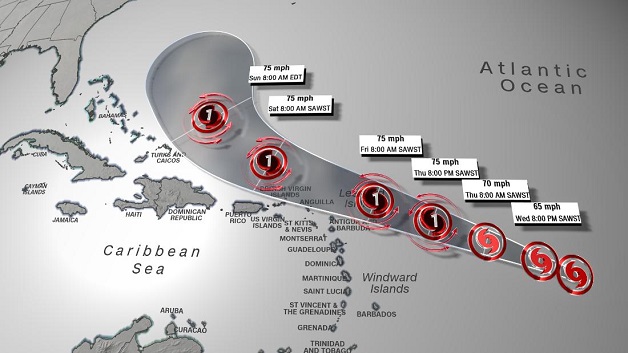 Tropical Storm Jerry has formed in the Atlantic, east of the Caribbean, and is expected to strengthen into a hurricane in the next few days.

According to the National Hurricane Center – Jerry is the 10th named storm of the 2019 Atlantic hurricane season.

Jerry is moving toward the west-northwest near 13 mph with maximum sustained winds of 45 mph.

The storm is still far from land, but it’s gaining intensity.

Jerry is forecast to continue moving to the west-northwest at a slightly faster speed over the next few days. It will be near the northern Leeward Islands tonight or Friday.

The storm is expected to eventually curve north, away from Florida.

Meanwhile, Hurricane Humberto has increased its forward speed as it moves closer to Bermuda.

Forecasters say hurricane conditions are expected to reach the island Wednesday night and continue into early Thursday morning with rainfall accumulations of 2 to 4 inches with maximum amounts of 6 inches expected.

Humberto is about 285 miles west of Bermuda and moving east-northeast at 16 mph. They expect Humberto’s center to pass just to the northwest of Bermuda on Wednesday night.

The center says Humberto is a large storm with hurricane-force winds extending 60 miles from the center. It is expected to remain powerful through Thursday.