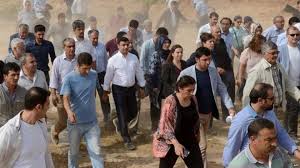 At least 30 people have died in clashes in the Turkish city of Cizre since a military operation began there last week, Turkey’s interior ministry says.

The ministry says most of the dead were Kurdish militants but the pro-Kurdish Peoples’ Democratic Party (HDP) says 20 civilians were killed in the violence.

According to BBC News, Police earlier today stopped a delegation of HDP leaders who were trying to reach the south-eastern city on foot.

The group included the party’s leader and 30 members of parliament, who say they want to draw attention to what is happening in the mainly Kurdish area.

Messi trial for tax fraud to start on May 31st