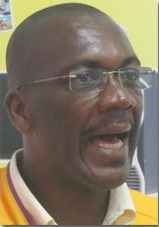 Twenty four Secondary schools are expected to participate in the 2015 Lions Club South Secondary Schools’ Public Speaking competition which is set to commence next week.

This year’s competition is being held in collaboration with LIME and the National Insurance Services (NIS).

Four zonal preliminaries will be held from October 13th to 16th, and the topics chosen are: “HIV/AIDS is no longer a death sentence, so why worry?”… “Whither Bananas! Is this the end of the industry?” … “The Sargasso weed is having an adverse impact on marine life in the Caribbean, are appropriate measures being taken to mitigate the effects?” … and “Many Vincentians confuse customer service with servitude.”

The final of the competition is scheduled for November 5th.

In his address at a media launch yesterday, President of the Lions Club South, Lion Michael John said the club is pleased with the participation thus far in the competition which is now being held for over 25 years.

He said among the objectives of the competition are to develop the public speaking skills of young people and to stimulate an attitude of research among them.

The 2019 Digicel SVG Gospel Festival climaxes this weekend with two programs on Friday...