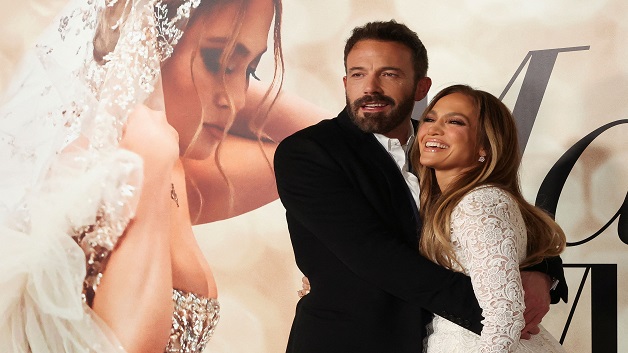 Jennifer Lopez shared an intimate look at her Las Vegas, Nevada wedding as she announced her marriage to Ben Affleck on Sunday afternoon with a picture of the happy couple post surprise nuptials.

“We did it. Love is beautiful. Love is kind. And it turns out love is patient. Twenty years patient,” she wrote in her newsletter.

Lopez wrote that the intimate wedding was “exactly what we wanted” as the pair smiled for pictures. Jennifer wore a strapless white dress with long lace sleeves, while Ben sported a classic white tuxedo for the midnight ceremony.

“Last night we flew to Vegas, stood in line for a license with four other couples, all making the same journey to the wedding capital of the world. Behind us two men held hands and held each other. In front of us, a young couple who made the three hour drive from Victorville on their daughter’s second birthday—all of us wanting the same thing— for the world to recognize us as partners and to declare our love to the world through the ancient and nearly universal symbol of marriage.”

Jennifer wrote that they “barely made it to the little white wedding chapel by midnight” where her twins, Emme Maribel and Maximilian, appeared in the driver’s seat from photos she shared of the pink Cadillac convertible “evidently once used by the king himself (but if we wanted Elvis himself to show, that cost extra and he was in bed).”

The couple first became engaged in 2002 and had plans to marry in September 2003, but postponed their wedding and eventually called things off by January 2004.