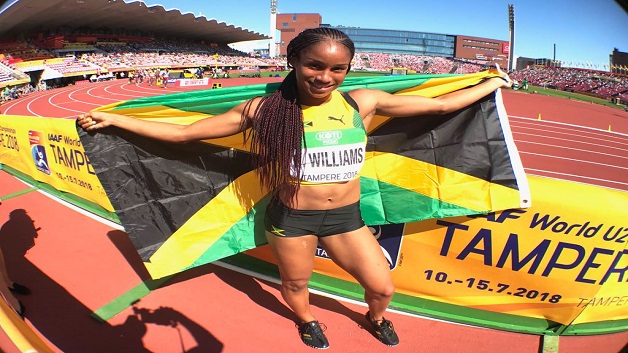 The 16-year-old is one of five females that were named in a release from the IAAF on Tuesday, a day after five men were named for the award that will take place at the IAAF Athletics Awards 2018 in Monaco on December 4.

Williams, who was too young for the IAAF World Under 18 championships last year, created waves when she won the sprint double in Tampere, Finland in July winning the 100metre in 11.16 seconds. She then set a new Jamaican Youth and Junior record with her 22.50 seconds in the 200metre two days later.

Earlier in the year, Williams won three gold medals at the CARIFTA Games, winning the 100metre, 200metre and 4×100 metre gold medals in the Under 17 age group.

Meanwhile, residents in the Canadian city of Calgary have voted strongly against bidding to host the 2026 Winter Olympics.

More than 56% of voters rejected the idea amid a high turnout.

The Calgary vote leaves the Swedish capital Stockholm and an Italian bid involving Milan and Cortina D’Ampezzo as the only candidates left.

Interest in hosting the summer and winter Olympics has fallen as the cost of staging the events has increased.