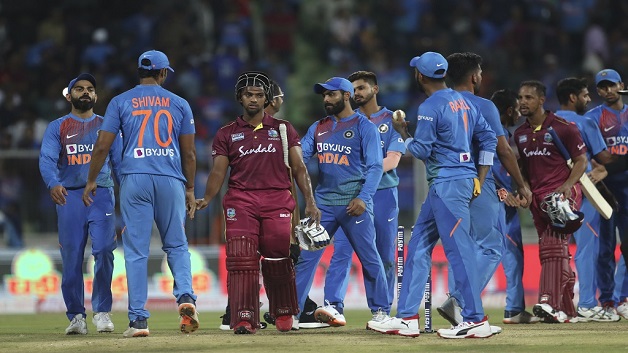 West Indies’ bid for a rare series win fizzled under the weight of an enormous run chase as India pulled off a convincing 67-run victory in yesterday’s third Twenty20 International to clinch a 2-1 verdict in the three-match series.

Faced with a record run chase of 241 for victory at the Wankhede Stadium, West Indies ended on 173 for eight off their 20 overs to suffer their eighth defeat in nine T20s to India and also notch their third successive series defeat to the subcontinental powerhouses.

Captain Kieron Pollard belted his second half-century in six innings when he top-scored with 68 from 39 balls, but his demise at the end of the 15th over saw the Caribbean side’s slim hopes also disappear with him.

Opener Evin Lewis was ruled out of the game after sustaining soft-tissue damage to his right knee while fielding, leaving West Indies short of a key batsman.

Asked to bat earlier, India stormed to their third- highest total in T20 Internationals behind Man-of-the-Match KL Rahul’s scintillating 91 and additional half-centuries from fellow opener Rohit Sharma (71) and captain Virat Kohli (70 not out).

Health officials warn of diphtheria in Venezuela and Haiti