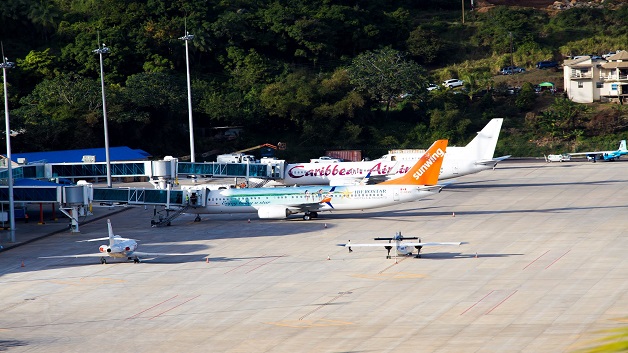 Hundreds of Vincentians converged at Argyle on Tuesday February 14th 2017 to witness the historic opening of the Argyle International Airport (AIA), the largest developmental project ever undertaken in this country.

The first flight to depart AIA was LIAT flight 560 to Barbados that left shortly before 7am. It was followed by the arrival of the first international commercial flight, a charter operated by Dynamic Airways that came from New York before continuing on to Guyana.

In the afternoon saw the arrival of chartered flights operated by SunWing and Caribbean Airlines (CAL) that originated from Toronto Canada and New York, respectively.

Speaking at the opening ceremony, Chairman of AIA, Mr. Garth Saunders described AIA as “the people’s airport” and expressed optimism that it will be operated and maintained to the highest standard to the benefit of Vincentians and all other users. And that every sector of the economy will benefit from its existence.

Minister of Agriculture Saboto Caesar in his remarks said the opening of AIA will allow for easier transport of local produce to regional and international markets.

Meanwhile, Jean Holder, Chairman of regional airline LIAT said that with the enhancement of operational facilities at Argyle International Airport, LIAT looks forward to providing a higher level of service to its customers.

US embargo of Cuba not the solution, says EU

Students to be acknowledged when the Ministry of Education hosts the 2016 National Awards...