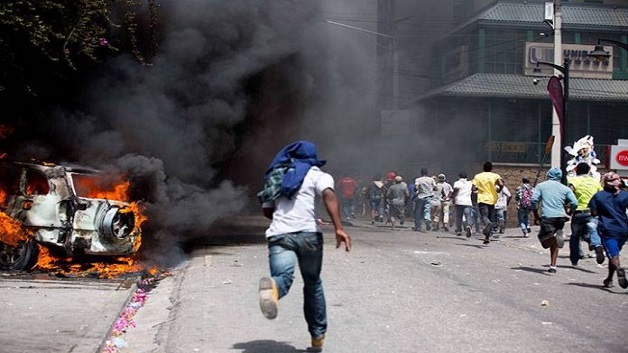 Opposition political parties in Haiti today intensified their calls for the resignation of President Jovenel Moise after six people were killed when a car crashed into a group of people yesterday further inflaming unrest in the French-speaking CARICOM country.

The Protestant Federation of Haiti (FPH) said it was calling on Moise to quickly convene a meeting of all stakeholders “to allow the country to recover its social cohesion and political stability and prevent once again, foreign intervention on the soil of Haiti”.

Protestors set fire to the vehicle after at least four men and two women were killed when the driver ploughed into the crowd yesterday.

The protestors are demanding that President Moise resign for not investigating allegations of corruption in the previous government over Petrocaribe, an oil alliance of many Caribbean states with Venezuela to purchase oil on conditions of preferential payment.

The country has been paralyzed by the action of the opposition backed supporters, with schools, businesses and some government offices closed.

At least nine people have so far died since the protests began several days ago and police spokesman Frantz Lerebours said the body of a young man was discovered yesterday while the authorities were clearing street barricades in the southern department of Nippes.