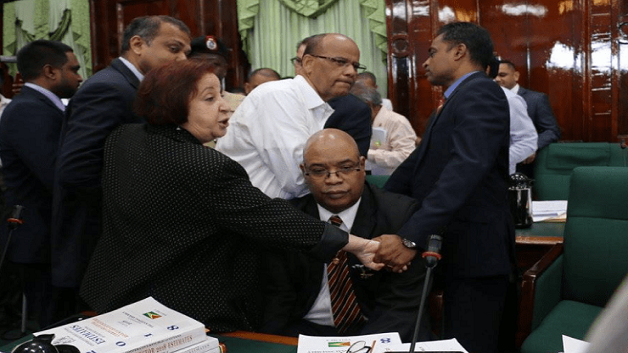 Opposition Member of Parliament in Guyana, Bishop Juan Edghill, was yesterday suspended for the next four sittings of the National Assembly in Guyana, following “gross misconduct” on Monday.

Minister of Social Protection Amna Ally successfully tabled the motion on the heels of Edghill refusing to leave the Chamber.

The sitting was suspended after Edghill, a member of the main opposition People’s Progressive Party (PPP), refused to leave the chamber even after Speaker Dr. Barton Scotland ordered the Sergeant at Arms to eject him from the session.

The Speaker’s order followed Edghill refusing to take his seat when the time agreed for the examination of the budget for the Ministry of the Presidency had expired. He continued to argue with the Speaker, insisting that more time be given.

When the Speaker ordered the Sergeant-at-Arms to remove Edghill and police were called in to assist, opposition legislators formed a circle around him to prevent his removal.

The sitting was subsequently suspended.

When the session resumed yesterday and Ally moved the motion for Edghill’s suspension, the Speaker agreed, noting that such a short suspension was “the most lenient” punishment given the opposition MP’s actions.

At a press conference called after Edghill’s suspension, Opposition Leader Bharrat Jagdeo said the PPP would continue to take part in the remainder of the Consideration of the Estimates to ensure scrutiny of Government spending.