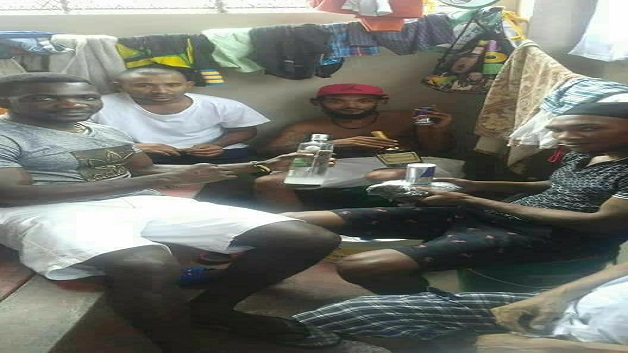 The Guyana Prison Service (GPS) said it has joined the Guyana Police Force (GPF) in launching an investigation into how inmates at a prison were able to acquire large bottles of liquor and engage in a Mothers’ Day party on Sunday.

Social media showed the inmates, including one who is on remand on a murder charge, at the New Amsterdam Prison posing with the drinks and smoking what appeared to be marijuana.

“There is no direct evidence pointing to any prison officer who would have facilitated the movement of the contraband into the prison. The prisoner would have identified a civilian who brought it,” GPS Director, Gladwin Samuels, told the online publication Demerara waves.

He said a playback of video surveillance recordings showed that a tractor was searched and nothing was found.

The publication said pictures of the prisoners holding and consuming what appeared to be bottles of liquor were posted on the Facebook page of the remanded murder accused, Abdul Andre Azimullah.

“Sanctions will be taken against those persons who are found culpable,” Samuels said.

The latest incident comes less than two weeks ago after Samuels had complained about the ongoing problem of smuggling of prohibited items into the prisons.

Violence is not Islam says Trinidad and Tobago’s’ President