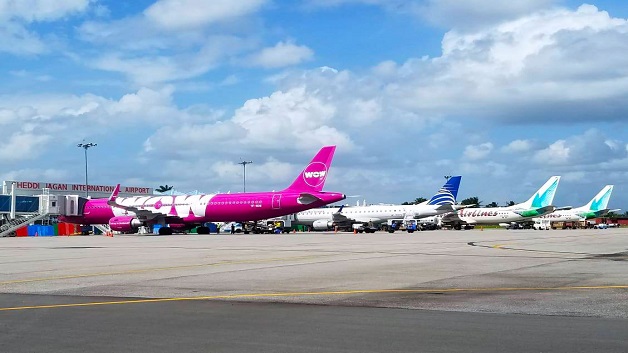 The Guyana Civil Aviation Authority (GCAA) this week said that there will be a phased re-opening of the country’s airports to international flights from July 1, following the lockdown in March to stem the spread of COVID-19.

GCAA Director General, retired Lieutenant Colonel Egbert Field was speaking during a webinar hosted by the Authority titled “Path to Clear Skies” where aviation stakeholders discussed the resumption of aviation operations following the cessation of flights brought on by the COVID-19 pandemic.

During Phase 2, which runs until July 31, there would be limited incoming flights for citizens, permanent residents, international workers, diplomats and repatriation flights.

Among the measures adopted by the management of CJIA are the wearing of masks by passengers and staff, checking of body temperature, placement of social distancing markers, sanitization stations and the removal of seats in areas accessible to the general public.

CJIA has suspended the use of boarding bridges for the time being but has not indicated when it will be brought back into service. The representative of the Antigua-based regional airline, LIAT, Sonya John, said that the airline is working towards making its operations cashless to further minimize contact with passengers. American Airlines resumed operations into Antigua on June 4, and subject to approval by the local authorities, proposes to resume flight to Guyana on July 7.

Generation Next Inc. to present college bursaries to Students