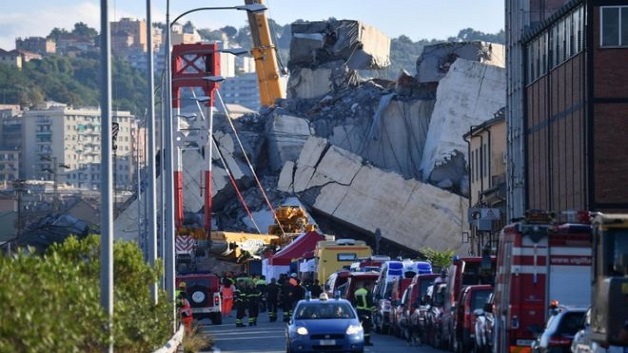 Grief in Italy for the 39 victims of a collapsed motorway bridge in Genoa has been mixed with anger that such a vital structure could have simply given way.

Rescuers have little hope of finding more survivors underneath the Morandi Bridge, where almost 40 vehicles fell 148 feet in yesterday’s collapse.

The cause is not yet known but there have been calls for the heads of the company operating the bridge to resign.

Hundreds of firefighters worked overnight with lifting gear, climbing equipment and sniffer dogs to try to locate more survivors. But an Italian Red Cross spokeswoman told the BBC’s Tim Willcox that only bodies had been found.

The local prefecture raised the death toll on Wednesday morning to 39, 37 of them identified. At least three children lost their lives.

US Senate approves a historic, $2 trillion stimulus package to assist the economy from...