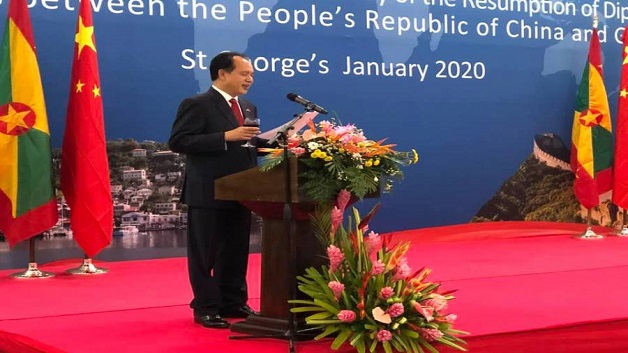 15 years after re-establishing diplomatic ties with the People’s Republic of China, Grenada has re-affirmed to the One China policy, and at the same time, has expressed satisfaction, with the level of activities occurring between both countries through bilateral cooperation.

Grenada’s Foreign Affairs Minister, Peter David, last evening, was quoted as saying, during a reception to mark the 15th anniversary, that when Grenada re-established diplomatic relations with the People’s Republic of China on 20 January 2005, it joined the vast majority of countries around the world which have embraced the policy, and, at the same time made a conscious effort to advance a foreign policy aimed at improving the socio-economic conditions of its people.

Referring to China Belt and Road Initiative, David said that Grenada believes that the initiative which will provide millions to developing countries in grant aid, conforms to the inherent requirements of the reform of the global governance system, demonstrates the concept of a community with a shared future, and showcases the characteristics of jointly sharing rights and responsibilities.

Dr Zhao Yongchen, who is the fourth ambassador China has assigned to Grenada, used the occasion to breakdown some of the benefits China has brought to Grenada.

He said that during the past 15 years there have been active and colourful cultural exchanges between the two countries.

200 Grenadian students have been awarded Chinese government scholarships to study in China, and more than 1,900 person-times participated in short-term training courses.

SVG to host two members of the Royal Family this month