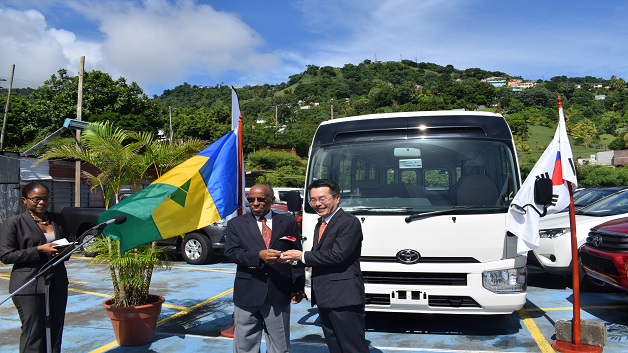 The Government of the Republic of Korea (South Korea) has donated a 30-seater bus to St. Vincent and the Grenadines.

The vehicle was handed over at a ceremony held at Star Garage Compound at Murray’s Road on Tuesday afternoon.

At the ceremony, South Korea’s Ambassador to St. Vincent and the Grenadines His Excellency Sung Moonup, handed over keys for the new school bus to Minister of Foreign Affairs, Sir Louis Straker who then entrusted the keys to the care of the Ministry of Transport and Works represented by the Permanent Secretary, Mr. Vibert Nedd.

Minister Straker thanked the Ambassador for the contribution of the school bus which will further assist in the provision of transport services to students.

The bus donated is a 2019 Toyota Coaster 30-seater valued at US$88,000 which is equivalent to approximately EC$240,000. It is the latest generation of its kind to land in St. Vincent and the Grenadines and has diverse capabilities including Anti-lock Braking System (ABS) and Vehicle Stability Control (VSC). The bus is diesel efficient, built specifically for the terrain and the adaptive corner roads of St. Vincent and the Grenadines.

Snakes: The Source of the newly discovered Coronavirus says Scientists

Senator James calls for more attention to be given to providing Technical Vocational Education...