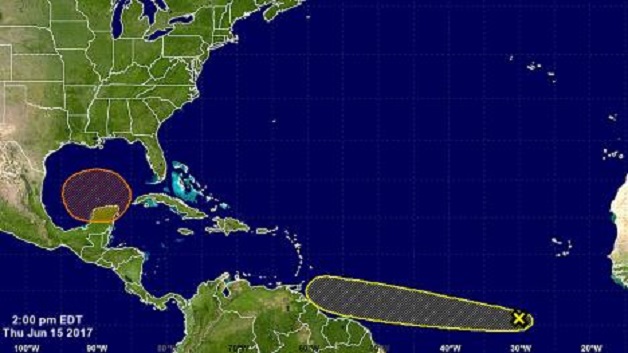 The National Hurricane Center (NHC) in Miami yesterday was monitoring two tropical systems with the potential to impact the Caribbean over the next several days.

Development, if any, of this system should be slow to occur during the next few days while the wave moves westward near 20 miles per hour over the tropical Atlantic. The chance of formation of a tropical cyclone is estimated to be low — 20 percent.

Meanwhile, a broad area of low pressure is expected to form over the northwestern Caribbean Sea and the Yucatan peninsula this weekend.

According to Caribbean News Now, the NHC said conditions appear to be favourable for gradual development of this system while it moves slowly northwestward toward the southern Gulf of Mexico early next week. The chance of formation of a tropical cyclone is estimated to be medium — 50 percent.