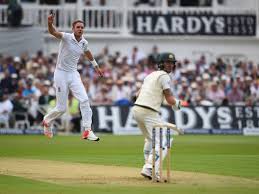 Alastair Cook had called for England to “etch their names in history” as England sought a victory in the fourth Test that would regain the Ashes and ease the memory of their whitewash in Australia 20 months earlier.

But even Cook, an England captain brimming with expectation, would not have anticipated that they would carve through Australia’s batting so quickly at Trent Bridge on one of the most extraordinary starts to an Ashes Test in history.

Australia, were dismissed for 60 in only18.3 overs.

Stuart Broad, returned his best Test figures of 8 for 15 in 9.3 new-ball overs before a jubilant crowd.