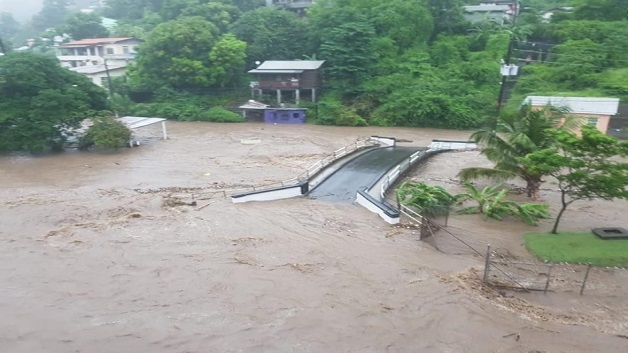 The National Emergency Council in Grenada was due to meet this morning to determine the impact of the adverse weather condition which the island experienced yesterday in which 152.8 millimetres of rain was recorded at the Maurice Bishop International Airport (MBIA) meteorological office.

The Council comprises representatives from both the private and public sectors and it is expected that the impact on the private sector will also be included in the assessment.

A number of private sector businesses especially in the Grand Anse , Morne Rouge areas were flooded from the out of control flowing water that converted roads into rivers.

According to Now Grenada, the Grenada National Stadium flooded with most of the water coming from the St. John’s River which is located in close proximity.

Yesterday, a tropical wave that was interacting with the Inter-Tropical Convergence Zone (ITCZ) brought heavy rains and thundershowers across the island for more than 7 hours.

Though the airport recorded the six inches of rain, it is expected that the interior of the island received significantly more.

Sylvan McIntyre, Acting Coordinator of the National Disaster Management Agency (NaDMA) said they had received several reports of landslides, flooded homes and roadways and land slippages from throughout the island but there was no loss of life.