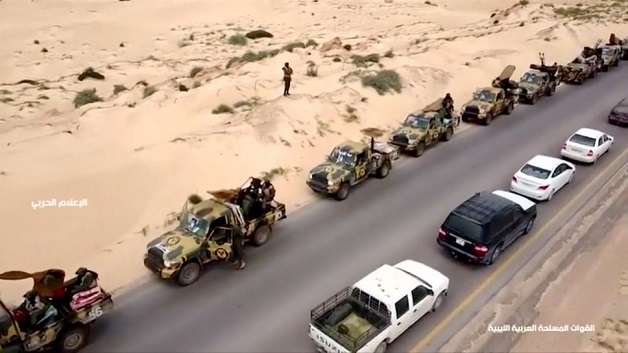 Libyan military forces have taken control a town south of the capital, Tripoli, signifying an escalation in the years-long power struggle in Libya.

According to Al Jazeera News, the capture of the town today – after overnight skirmishes with forces allied to Libya’s internationally recognised government, followed a rapid westward advance by Khalifa Haftar’s Libyan National Army (LNA) from its eastern base of Benghazi.

The oil-rich country, which has been in turmoil since the NATO-backed removal of its long-time ruler Muammar Gaddafi in 2011, has at least two rival administrations: the internationally recognised government based in Tripoli, headed by Prime Minister Fayez al-Serraj; and another in the eastern city of Tobruk, which is allied with the renegade general Haftar.

Tensions rose on Wednesday after Haftar’s forces said they had moved towards the western part of the country, prompting the Tripoli-based government to declare a military alert.