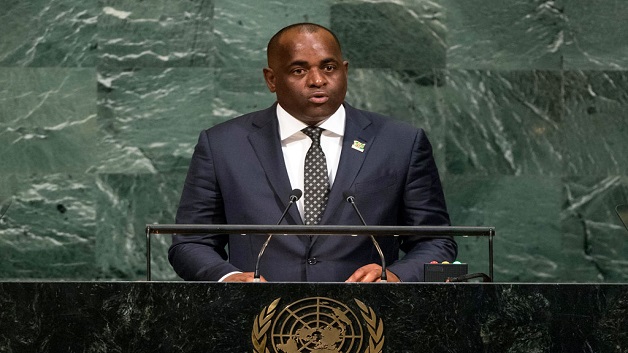 In words ripe with emotion lamenting that “Eden is broken”, Dominica’s Prime Minister Roosevelt Skerrit addressed the UN General Assembly on Saturday morning, seemingly intent on drawing the world’s attention to current conditions in Dominica in what he described as a landscape resembling a war zone.

The image he evoked was in direct support of his plea to fellow world leaders to assist the hurricane-ravaged island by lending the rebuilding equipment which would otherwise remain untouched “waiting for a war” and which is so desperately needed for the work of rebuilding the country.

Pointing directly to the causal factors, Skerrit addressed the much-debated issue of Climate Change in the world, declaring that in the Caribbean “…we did not start this war against nature…we did not provoke it.”

The Dominican Prime Minister asserted that much more must be done to assist the countries who bear the impact of climate change, and stressed that Dominica will rise again.

As he implored the international community to make a stand, the Prime Minister said that today we in the small nations of the world need to know “who has our backs.”

Citing the example of the United Arab Emirates (UAE) who has risen to the challenge by espousing a theme of increased giving, Skerrit asked his colleagues to follow the lead of the UAE. He asserted that much more must be done to assist the countries who bear the impact of climate change.

In light of the destroyed livelihood of the country and the resulting inability of the government to implement the planned National Vulnerability Risk and Resilience Fund, Skerrit contended that more funds must be made available for suffering nations.