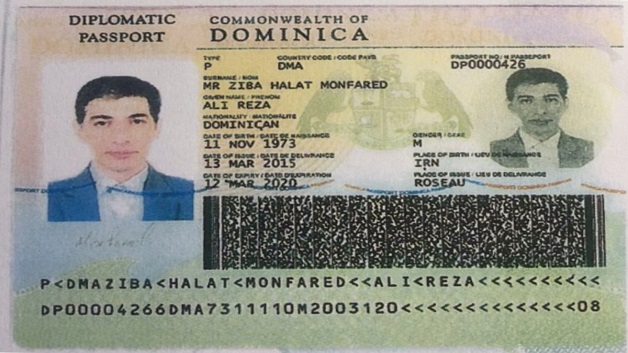 An Iranian man, who holds a diplomatic passport issued by Dominica and is accused of helping to embezzle billions of dollars while Iran evaded international oil sanctions, has been arrested after a lengthy international manhunt.

Alireza Zibahalat Monfared, age 43, was arrested by Interpol and handed over to Iran on January 15, 2017.

According to Caribbean News Now, Monfared is accused of involvement in Iran’s biggest-ever corruption scandal, working alongside tycoon Babak Zanjani who was sentenced to death last year for pocketing $2.8 billion while helping the country bypass sanctions.

In addition to his Dominica diplomatic passport, Monfared had various passports, including a regular Dominica passport, and had managed to escape extradition at least once when he was briefly detained in Malaysia, where he claimed diplomatic immunity.

He was reportedly arrested in the Dominican Republic and extradited to Iran through Havana and Moscow to face trial.

Regional law enforcement asked to look out for dangerous man