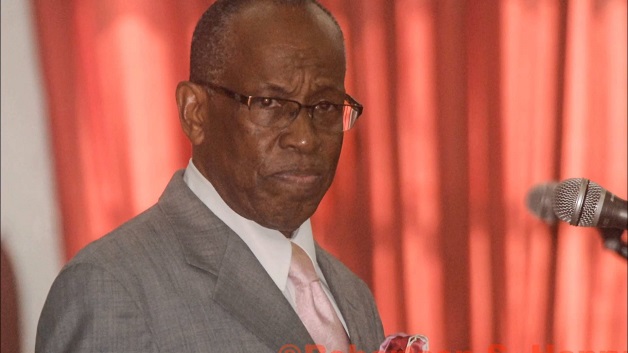 The frequency, intensity and severity of the hurricanes and other extreme weather events that have ripped through several islands in the Caribbean during this 2017 Atlantic Hurricane Season, are a direct result of climate change.

This point was highlighted by several Heads of State and government representatives, including this country’s Deputy Prime Minister and Minister of Foreign Affairs Sir Louis Straker, in their address at the UN General Assembly in New York.

In his presentation on Friday evening, Minister Straker said “the death and destruction wrought by this hurricane season are not merely freak weather events or vengeful acts of God; they are the direct results of the acts and or omissions of man. They are the manifestation of climate change.”

Minister Straker reaffirmed that our Small Island Developing States are the most vulnerable to climate change while contributing the least to the emissions that cause it.

He stressed that the nations that have contributed the most to climate change should do the most to mitigate its effects and assist others in adapting to the dangerous new realities.

The Deputy Prime Minister reiterated St. Vincent and the Grenadines support and commitment to the Paris climate accord or Paris climate agreement, an agreement within the United Nations Framework Convention on Climate Change (UNFCCC) that entered into force on November 4, 2016.

In light of the death and damage in several Caribbean countries, resulting from the recent hurricanes, Minister Straker called on the international community to convene a Donors Conference to address the daunting challenges these countries face in rebuilding.

“The independent countries of Antigua and Barbuda, St. Kitts and Nevis, Cuba, The Bahamas and Dominica require the special and sustained support of the international community. These countries require immediate and massive assistance in both immediate relief and long term reconstruction. That assistance must be concessional and free from antiquated notions of per capita GDP (Gross Domestic Product). As such we join other countries in calling for a Donors Conference to address the daunting challenges that these countries face. Only together can we can recover,” Minister Straker said.