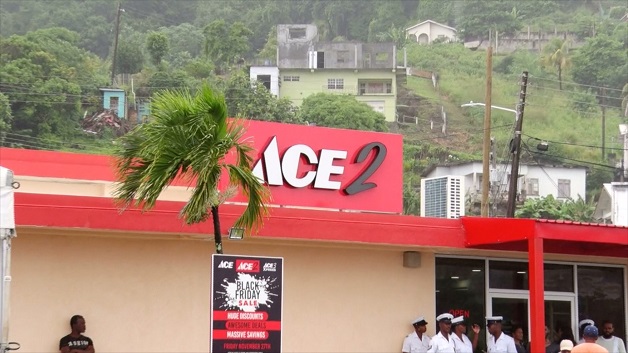 The decommissioned E.T. Joshua Airport is on its way to becoming one of this country’s major shopping centers with the official reopening of ACE 2/Coreas Pharmacy 2 which has relocated to that site and expected opening soon of ten other stores at that location.

Manager of National Properties Hans King stated that anticipation is high for the opening of a complement of stores. According to King 10 stores are already lined up to set up shop in the Centre, offering a range of services, including, banking, a bar, and a high end restaurant, in what used to be the E.T. Joshua Airport restaurant.

Prime Minister Dr. The Hon Ralph Gonsalves congratulated all those who were involved on the

ACE 2/Coreas Pharmacy 2 project stressing that he was very happy with the move by Coreas Hazells Inc. Dr. Gonsalves also noted that the Government has a good partnership with the Company.

Prime Minister Gonsalves used the opportunity to point out that the area needs appropriate drainage and additional river defenses to make way for further infrastructural developments.

“Walk 2 Freedom” to be held this Friday