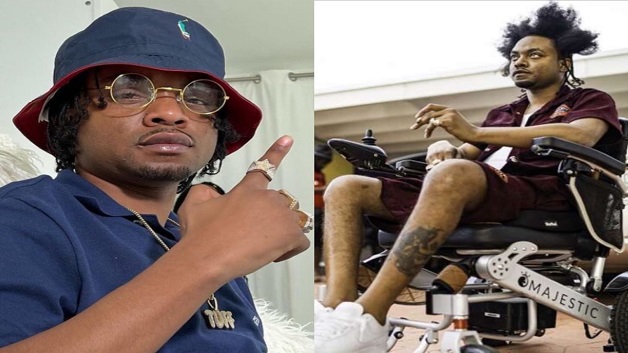 Rygin King reveals for the first time that he is paralyzed from a gun attack two years ago.

The Montego Bay dancehall artist has kept a low profile since the 2020 shooting, which left his manager’s wife dead, and has finally opened up publicly as he shared that he is paralyzed and also shared the heart-rending details of the shooting while seeing himself bleed out.

Rygin King had rubbished claims in August 2020 that he was paralyzed. In a new interview with the Jamaica Observer, the artist opened up about his injury and confirmed that he is currently unable to walk.

The newspaper shared a photograph of the artist well dressed and sitting in a wheelchair, which shocked fans on social media. The artist had an upbeat spirit and shared that he has taken the event in stride and maintained a positive attitude.

“I don’t know anyone who is in a position like me, inna one tragic unfortunate situation like me and who hold it like how me hold it, bredda…and mi no bawl out on the internet and all now, mi no go to the press, no one don’t know what happened after Rygin King get shot because is a rocky road bredda and we still ah go through it,” he said.

The” artist shared that he has been doing therapy and working with professionals to help him regain his ability to walk.

“I know I will walk again, I know it is God’s will, a lot of youths call me to say me ah motivate dem, so mi ah hold it said way,” he said.

The artist confirmed that on the fateful day of the shooting, he was shot three times and nearly died. At the time, reports are that they were returning from a funeral with his entourage when his manager’s car was involved in an accident leading them to stop in Struie district, Westmoreland. That’s when gunmen fired on the artist who was at the height of his career.