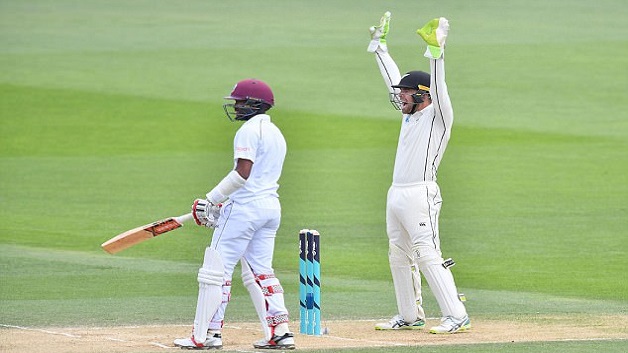 A spineless batting effort sent West Indies crashing to an innings and 67-run defeat to New Zealand, as the Caribbean side tamely conceded the opening Test inside four days early on Monday.

Entering the penultimate day at the Basin Reserve brimming with confidence following an encouraging display on Sunday, West Indies’ enterprise deserted them as they collapsed from a promising 214 for two overnight to 319 all out in their second innings.

They were 231 for no further loss inside the first half-hour but dramatically lost their last eight wickets for 88 runs, to be bowled out about 50 minutes after lunch.

Opener and vice-captain Kraigg Brathwaite, unbeaten overnight on 79, top-scored with 91 while Shai Hope moved from 24 at the start to 37, but none of the Windies batsmen could muster the required commitment to stretch the contest into the fifth day.

The defeat was the seventh in 11 Tests on New Zealand soil for West Indies inside the last 17 years, and their third innings loss in four straight defeats in Wellington, dating back to 1999.

For New Zealand, the win gave them a precious 1-NIL lead in the two-match series, ensuring they extended their record of not having lost a series to the Windies at home in 22 years.

West Indies travel to Hamilton for the final Test starting at Seddon Park on December 9.