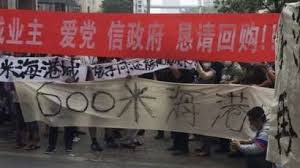 Residents of the Chinese city of Tianjin gathered outside the Mayfair Hotel, where officials have been giving news conferences.

Residents say the chemical storage warehouses which blew up had been built illegally close to their homes.

The blasts focused on a warehouse which was storing sodium cyanide.

Officials now say 114 people died in the explosions with 70 still missing, mostly firefighters. Nearly 700 are still in hospital. At least 6,000 people have been displaced, state media report. Some 17,000 homes damaged by the blasts and their shockwaves

An investigation into the cause of the explosions is under way