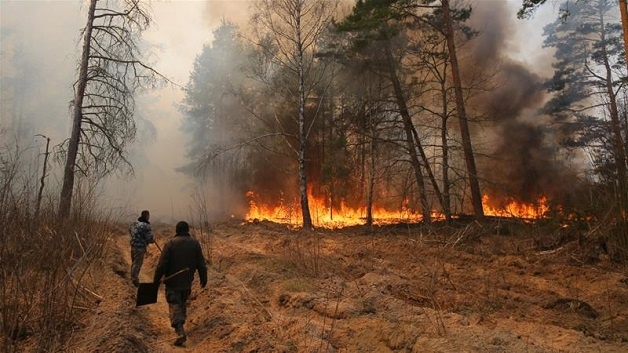 Forest fires that have been burning for several days in northern Ukraine are now no more than a few kilometres from the abandoned Chernobyl nuclear plant.

Tour operators are reporting that one blaze had reached the abandoned town of Pripyat, which used to serve the plant.

The fire is just 2km (1.24 miles) from where the most dangerous waste from the plant was stored.

Greenpeace said the fires were much bigger than the authorities realised.

The NGO’s Russia branch, said the largest fire covered 34,000 hectares, while a second fire just a kilometre from the former plant was 12,000 hectares in area.

Police said the fire had been burning since the weekend of 4 April, after a man set fire to dry grass near the exclusion zone. It has since moved closer to the nuclear plant.

More than 300 firefighters with dozens of pieces of special hardware are reportedly working at the site, while six helicopters and planes are attempting to extinguish the fire from above.