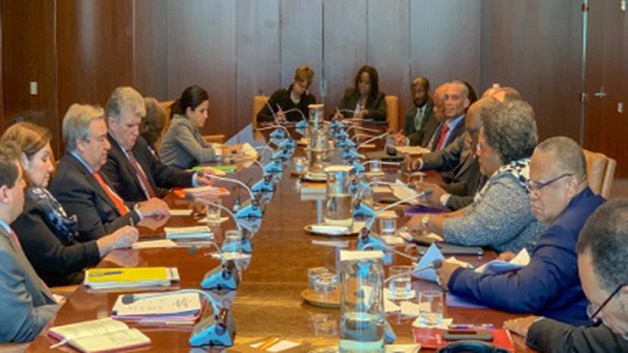 Caribbean Community (CARICOM) leaders have ended a meeting with United Nations Secretary General Antonio Guterres, expressing optimism that the UN will assist in establishing the roadmap towards peace and security for Venezuela.

CARICOM chairman and St. Kitts-Nevis Prime Minister Dr. Timothy Harris led a delegation that included his Trinidad and Tobago counterpart, Dr. Keith Rowley and Barbados Prime Minister Mia Mottley to the talks, on the possibility of the UN intervening in the ongoing political situation in the South American country.

According to a statement issued by the Office of the Prime Minister in Trinidad and Tobago, Prime Minister Rowley expressed hope – that in the not too distant future there will be significant improvement and a diminishing of tensions in Venezuela

Following the discussions – the CARICOM delegation held a meeting with the Canadian Ambassador to the United Nations, Marc-Andre Blanchard, and is also expected to meet with officials from Russia, China and Venezuela.