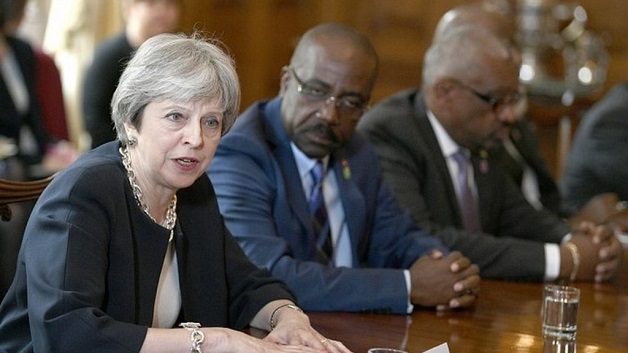 At a meeting in Downing Street, May told representatives of the 12 Caribbean members of the Commonwealth that she took the treatment of the so-called Windrush generation “very seriously”.

The UK government has prompted anger in Caribbean countries and at home over a clampdown on people who went to Britain about 70 years ago when the ship Empire Windrush took the first group of West Indian immigrants.

They and their parents were invited to help rebuild Britain after World War II and — with many of them legally British, as they were born while their countries were still colonies — they were given indefinite leave to remain.

But those who failed to get their papers in order are now being treated as illegal, and at risk of deportation if they cannot provide evidence of every year they have been in Britain.

According to BBC News, Prime Minister May said she was “genuinely sorry” about the anxiety caused by the Home Office threatening the children of Commonwealth citizens with deportation.

The UK government “valued” the contribution they had made, she said, and they had a right to stay in the UK.

The Prime Minister said she wanted to “dispel any impression that my government is in some sense clamping down on Commonwealth citizens, particularly those from the Caribbean who have built a life here”.

She said the current controversy had arisen because of new rules, introduced by her as home secretary, designed to make sure only those with the right to remain in the UK could access the welfare system and the NHS.

“This has resulted in some people, through no fault of their own, now needing to be able to evidence their immigration status,” she told the foreign ministers and leaders of 12 Commonwealth nations in Downing Street.

The row has been hugely embarrassing for the UK government, coinciding with a meeting of the 53 Commonwealth heads of government in London this week.