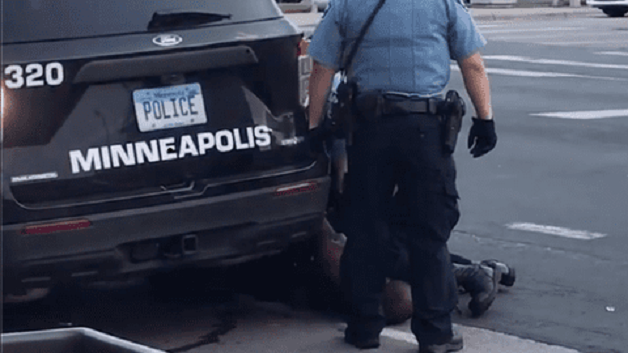 A Black man who yelled “I cannot breathe” as a white Minneapolis police officer pinned him down with his knee in the US state of Minnesota died late on Monday, police confirmed, drawing outrage from community members and leaders, and leading to the officers’ termination.

Video of the incident shows the police officer pinning down George Floyd, believed to be in his 40s, to the pavement with his knee on the man’s neck for several minutes.

Floyd was identified by prominent civil rights lawyer Ben Crump, who said he had been retained by the Floyd family.

Floyd was heard saying in the video: “Please, please, I cannot breathe.”

According to Aljazeera, Monday night’s incident comes on the heels of several cases of Black men and women being killed by police or former law enforcement across the US.

There have been violent clashes between police and protesters in the US city of Minneapolis following the death of an unarmed black man in police custody.

The incident echoes the case of Eric Garner, who was placed in a police chokehold in New York in 2014. His death became a rallying call against police brutality and was a driving force in the Black Lives Matter movement.

They began in the afternoon on Tuesday, when hundreds of people came to the intersection where the incident had taken place on Monday evening.

Organisers tried to keep the protest peaceful and maintain coronavirus social distancing, with demonstrators chanting “I can’t breathe,” and “It could’ve been me”.

Ministry of Health to commission a Mobile Blood Bank