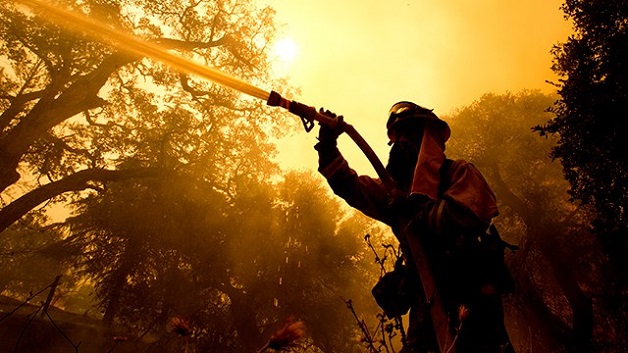 Officials are making grim discoveries-bodies burnt beyond recognition -as they search the blackened ruins left by wildfires scorching parts of Northern California.

“Some of them are merely ashes and bones,” Sonoma County Sheriff Rob Giordano said at a press conference yesterday.

“And we may never get truly confirmative identification on ashes. When you’re cremated, you can’t get an ID.”

Thirty-one people have been killed since the wildfires began Sunday night, making this outbreak one of the deadliest in state history, according to the California Department of Forestry and Fire Protection.

Deadly wildfires have been tearing through the state, destroying homes and businesses and prompting evacuation orders.

In Sonoma County, authorities had to turn to dental records, fingerprints, tattoos and serial numbers on hip implants to identify victims.

“We’ve been forced to work that direction because we may not have enough information to identify people, because of the fire and the severity of the burn,” Giordano said according to a report by CNN News.

Since Sunday, the deadly fires have leveled thousands of homes and forced evacuations in Northern California’s wine country and produced unhealthy air quality in the San Francisco Bay Area.

The biggest fires in Northern California were far from contained.

North Korea demands the removal of US Secretary of State

Liverpool returned to the top of the English Premier League yesterday with a 2-1...