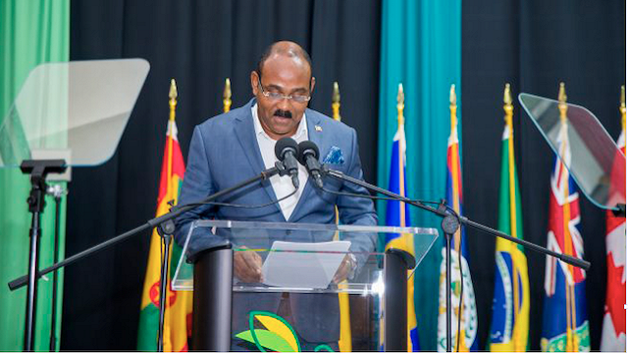 Antigua and Barbuda’s Prime Minister Gaston Browne is once again levelling strong criticism against larger countries for the role they have played in climate change and for their de-risking practices which he said are threatening the Caribbean, and he is calling upon leaders to hold larger nations accountable.

Browne, who was speaking at the opening of the Caribbean Development Bank (CDB) 48th annual meeting of the board of governors in Grenada yesterday, said, “Hurricanes Irma and Maria also demonstrate the need for those who are responsible for climate change to take responsibility for the devastation they cause and to better respond, with real time and adequate financing, to address the crisis they create.”

He said governments should “never retreat” from blasting these sentiments on the world’s stage because the “very existence” of the region hangs in the balance.

According to the Antigua Observer, Browne admonished the gathering that the best route to increasing the resilience of the region is through further tightening of the union among the countries.

US hopes to strengthen energy initiative in the Caribbean