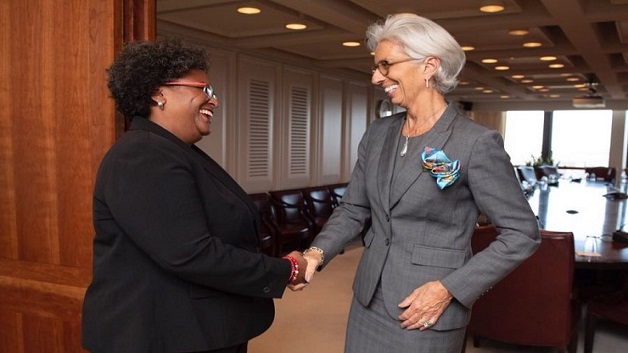 Following a visit of one team from the International Monetary Fund (IMF) and Prime Minister Mia Mottley going up to Washington to speak with officials of the financial institution, has come news that another team from the IMF will be in Barbados next month to begin negotiations with the Government.

Prime Minister Mottley made the disclosure over the weekend, as she gave an update following the latest talks with IMF Managing Director Christine Lagarde, which she said went well.

She said she was happy the engagement with Lagarde recognized the country’s situation was urgent, and reported that the IMF was prepared to support Barbados’ Economic Recovery and Transformation Plan.

“The initial team was just a fact-finding team. This team that comes now, from July 2 to 12, will actually be a negotiating team with the Barbados Government, to be able to settle on what would be the terms and conditions of the contract that underpins how much money they will supply to us, and what conditions there will be, if any, to that money,” she explained.

According to Caribbean 360 News, Mottley explained that the support Barbados would be seeking from the institution would be a loan at “very, very negligible” interest rates—around one per cent that would allow the country to boost its international reserves.