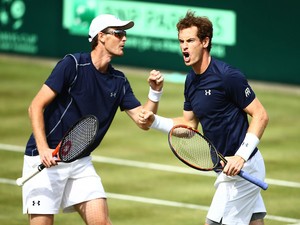 British number one Andy Murray will play brother Jamie for the first time in a Tour-level match when they meet in men’s doubles at the Rogers Cup.

According to BBC Sports Andy Murray and Leander Paes defeated Jeremy Chardy and Kevin Anderson 6-3 6-1 to set up a second-round tie with Jamie and John Peers in Montreal.

The pair, who are on course to qualify for the season-ending ATP World Tour Finals at the O2 Arena in London, also reached the Wimbledon final this year.

In the men’s singles, second seed Murray has received a first-round bye so will meet Tommy Robredo in the second round.