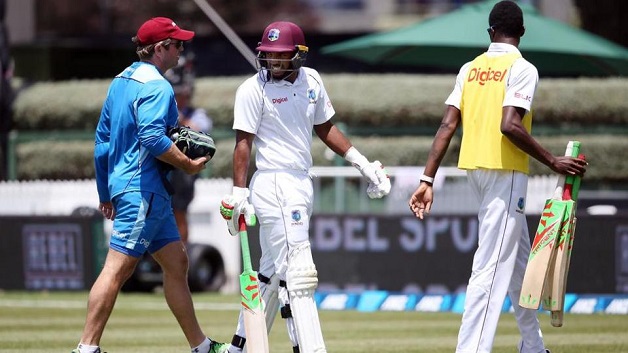 West Indies batsman Sunil Ambris suffered a fractured arm during a short-ball salvo in the second Test in Hamilton today, forcing him out of the One Day International (ODI) series later this month.

Ambris was on four when caught by a rising delivery during a feisty spell from New Zealand short-ball specialist Neil Wagner.

He stayed on the field to take a single off Tim Southee in the next over before walking off when Wagner returned to resume his bouncer barrage.

“He has been taken to hospital and X-rays confirmed a fractured arm,” a team spokesman said, adding “This means he will also be out of the ODI series.”

Meanwhile, New Zealand is to rest senior players including Kane Williamson and Tim Southee for part of the upcoming limited-overs series against the West Indies.

Selector Gavin Larsen made the announcement in naming the squad today.

Williamson and Southee will play in the opening one-day international on December 20 before being replaced by Neil Broom and Mitchell Santner for the next two games in the three-match series on December 23 and 26.