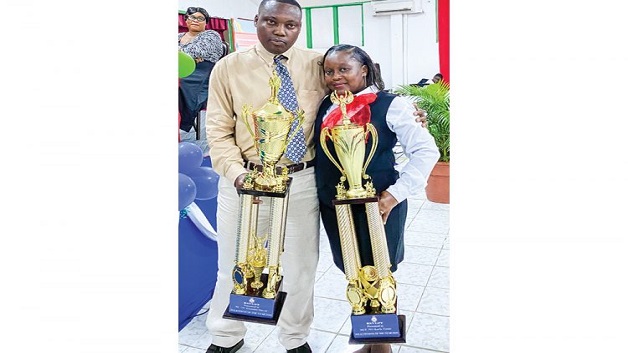 The Police Service, one of the departments which falls under the umbrella of the Ministry of National Security, hosted an Awards dinner for active Police men and women and retirees last month.

There, in his remarks, Commissioner of Police Colin John said he is pleased with the results his department produced.

The success achieved however, could not have been made possible without the hard work and dedication, of members within the department.

In today’s special report, WE FM News shed some light on the secret behind the success of the Police Woman of the year in 2019, Corporal Karla Timm, attached to the Major Crimes Unit, within the Criminal Investigations department, a division dominated by males.

Corporal of Police – Karla Timm, said during an Interview, that the secret behind her success, lies within her belief in God.

“I Came up in a Christian background. I am not a Christians, but the thing is that, I have a mom who always gives me a word of prayer every morning and at nights she will call, however on mornings when I wake up, I would still have a little prayer to take that little time out for God and if I am having a challenging day or time, I will also go in a corner and talk to God in silence, for him to give me the extra courage and strength to make the day.”

Ms. Timm said her interest to become a Police Officer,  has always been a childhood dream.

“I first became drawn towards becoming a Police Officer,  when I use to see police officers growing up, they way they would dress, the uniqueness, the neatness. So I’ve picked a profession and I’ve really been in it for that amount of years and I am seeing myself being more efficient.”

Ms. Timm however that said being in the division is not without challenges.

“Yes you are a female and you are working among men who you want to show, that hey, what a man can do so can a woman. It’s not easy being a female, working at Major Crimes Unit and then you have to get up like a man during the early hours of the morning. Sometimes you’re missing your family a lot. It’s more of a kick back challenge.”

And Ms. Timm has this advice for persons who wish to be a part of the department.

“Don’t make bad things or things that you hear, deter you from pursuing that profession. A police officer is just like an ordinary person, we are ordinary human beings and if you pick that profession, you work towards it. Yes you have the ill ones, but at the same time to, once you put your foot forward and you come into the organization, you must be disciplined, go to the trainings and meet bad times, but you must still persevere.

Cuban diplomats expelled by US amid ‘hearing loss’ claims