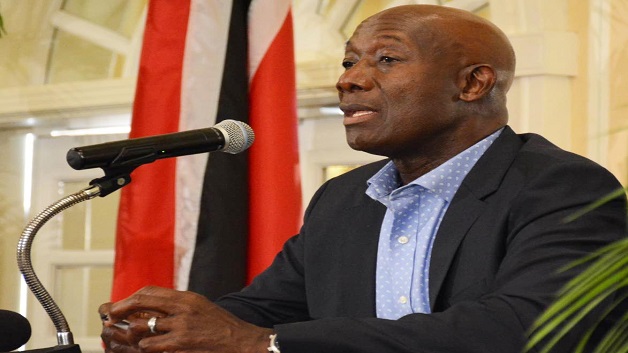 Trinidad and Tobago’s Prime Minister Dr. Keith Rowley says his administration will take legal action against any civil aviation worker who joins a call by trade unions to shut down the country tomorrow in protest at the decision to close the oil refinery of the state-owned oil company, PETROTRIN, with the loss of several hundred jobs.

Speaking at a public meeting of the ruling People’s National Movement (PNM) in Marabella on Tuesday night, Rowley warned he was not prepared for the country’s airspace to be shut down and urged civil aviation workers to disregard the call by leader of the Public Service Association, Watson Duke.

“The law says in this country that essential services are not open to industrial action, otherwise you will be breaking the law. But I see Watson Duke on television big and bad…telling civil aviation workers to abandon their posts.

“Well, tonight I want to say to the civil aviation workers do not take any advice from Watson Duke and shut down our airspace. People’s lives are at risk. Watson Duke is a politician who engages the government and the PNM as a politician and that is political advice and it is dangerous to the region, to the country and to you as a worker,” Rowley told supporters.

Prime Minister Rowley announced on Sunday that his administration is prepared to give the first option to the Oilfield Workers Trade Union (OWTU) to acquire the refining assets of PETROTRIN, telling the nation that the “decision to close the refinery was taken after detailed analysis and deep introspection”.

But the OWTU has since rejected the offer and said it was merely a ‘ruse” for the government to sell the refinery to a preferred buyer.

Rowley said approximately 1, 700 permanent workers will be affected in the refining and marketing division of the company, while in exploration and production, employment levels are to be reduced from 1700 workers to approximately 800 persons.