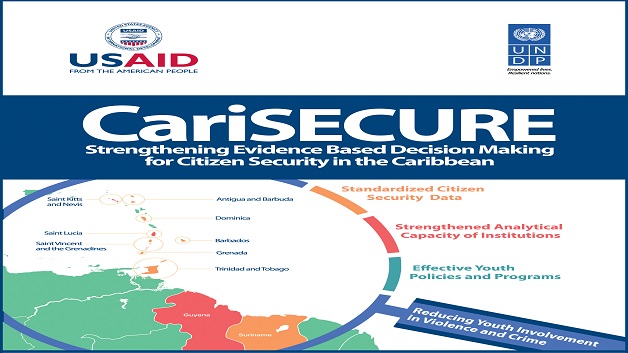 Steps are being taken to reduce youth involvement in violence and crime in St. Vincent and the Grenadines and other countries in the eastern and southern Caribbean.

This is being done under CariSECURE, the Strengthening Evidenced Based Decision Making for Citizen Security in the Caribbean, one of the three components of the broader USAID Youth Empowerment Services (YES) project.

In collaboration with the governments of 10 Eastern and Southern Caribbean countries and other UN, regional and sub-regional agencies, CariSECURE will strengthen the capacity of regional and national institutions to collect, analyze, and use citizen security data to develop evidence-based policies and programs that effectively target risk factors which drive youth violence, crime and victimization.

Mr. Christopher Cushing, Mission Director of the United States Agency for International Development (USAID) for the Eastern and Southern Caribbean said the projects also focuses on enabling communities and families to withstand, mitigate and recover from incidences of crime and violence.

Meanwhile, Prime Minister Dr. Ralph Gonsalves in delivering the feature address at a ceremony at Beachcombers Hotel Conference Room, where the government officially endorsed the CariSECURE toolkit, said that his administration has put a number of targeted interventions in place geared at ensuring that young people are meaningfully engaged.