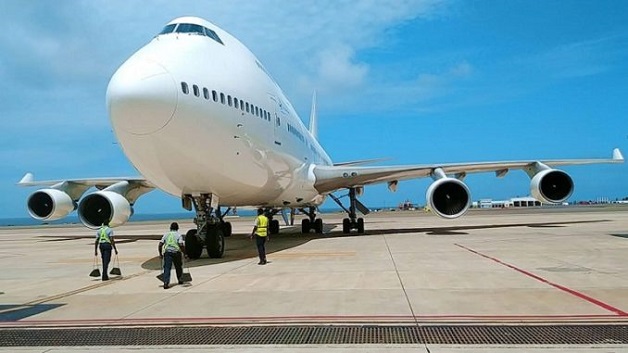 The Boeing 747 – 400 which landed here on May 24th and is an investment venture between local and foreign investors is now registered outside of SVG.

According to News784, Prime Minister Gonsalves during a conversation with one of the principal shareholders, he was told that the 747- 400 is currently registered in Barbados.

He said the investors noted that could not wait on the Eastern Caribbean Civil Aviation Authority (ECCA) and they were moving to slow.

Captain Paul Delisle, ECCAA’s flight operations inspector, confirmed that the request to certify the 747-400 was a big step for ECCAA.

He noted that, as the airworthiness regulator for six member nations of the English-language Organisation of Eastern Caribbean States (Antigua and Barbuda, Dominica, Grenada, Saint Kitts and Nevis, Saint Lucia, and St Vincent), ECCAA today has oversight of six AOCs, 14 airports and just 41 aircraft. Six are helicopters—but none of the aircraft is a large commercial jet.

Evacuations on Australian island ahead of Tropical Cyclone Trevor