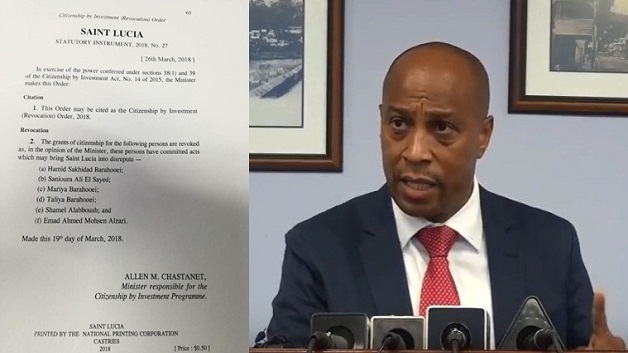 The St. Lucia Gazette has featured the names of six individuals who have lost their Saint Lucian citizenship under the Citizenship by Investment programme (CIP).

The names of the six individuals were published on page 65 of the March 26, 2018 edition of the St. Lucia Gazette.

According to the Gazette, “this Order may be cited as the Citizenship by Investment (Revocation) Order, 2018” and was made on March 19, 2018.

The individuals had their citizenships revoked because, according to the Gazette, they committed acts which may bring St. Lucia into disrepute.

According to St. Lucia News Online, Nestor Alfred, who was appointed Chief Executive Officer of the Citizenship by Investment Unit effective August 8, 2017, had revealed at a press conference on February 21, 2018 that 259 persons had been granted citizenship/passport under the CIP.

At that time, Alfred also said only a small number of persons were rejected or had their citizenship revoked.