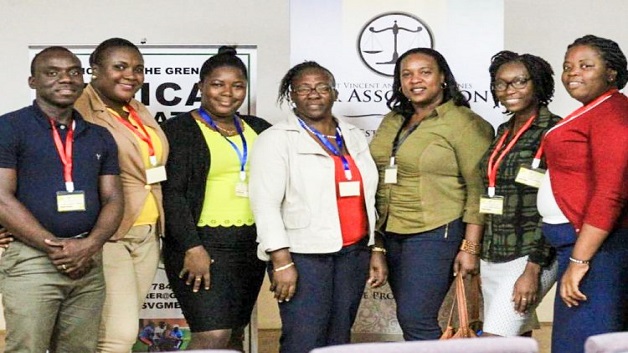 Yesterday, the Sexual Offences Unit within the Royal Saint Vincent and the Grenadines Police Force – celebrated 1 year of existence under the theme “See something, know something, say something; stop all Sexual Abuse”.

The Unit was launched on 6th November, 2018 with nine (9) persons attached to the unit, seven (7) females and two (2) males. The unit presently have eight persons on staff who investigates most of the sexual assault throughout Saint Vincent and the Grenadines.

To commemorate its first anniversary, members of staff of the sexual offences unit and Commissioner of Police, Mr. Colin John attended a Church service on Sunday November 3, 2019 at the Methodist Church Hall.

This was followed by a series of lectures on sexual abuse and preventative methods to counter sexual abuse.

Today the staff will culminate its celebratory activities with a social event to be followed by a Radio Discussion.

Since its inception, the Unit has investigated a total of one hundred and seventy four (174) cases of Sexual Assaults (to date); made ninety (90) arrests, and have had two (2) completed trials which have resulted in convictions and custodial sentences in both cases.

Apart from investigations, the Unit has embarked on an educational drive by visiting several schools and held discussions on sexual abuse with students, teachers and parents.