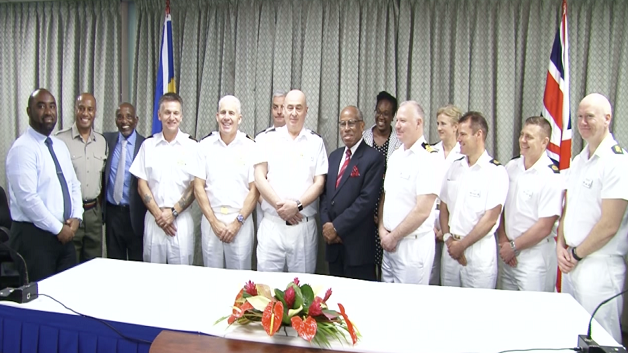 A delegation from the Royal Navy is currently in St Vincent and the Grenadines on a recruitment drive and several young persons are expected to be recruited.

In a small ceremony at the Ministry of Foreign Affairs Conference Room yesterday, Minister of Foreign Affairs Sir Louis Straker welcomed the delegation, noting it was exciting to have them here as many young people have shown an interest in entering the service of the Royal Navy.

Sir Louis said the recruitment is of mutual benefit to both St Vincent and the Grenadines and the United Kingdom as it provides young people with opportunities for professional advancement and personal development, while the St Vincent and the Grenadines’ High Commission to the United Kingdom, His Excellency Cenio Lewis, expressed gratitude for the visit.

The team is expected to be here for the next two weeks.

No coins from Eastern Caribbean Central Bank for Antigua and Barbuda

E-document and E-archiving System to kick off in SVG

Police issue wanted bulletin for Chapmans man in connection with reports of Robberies and...