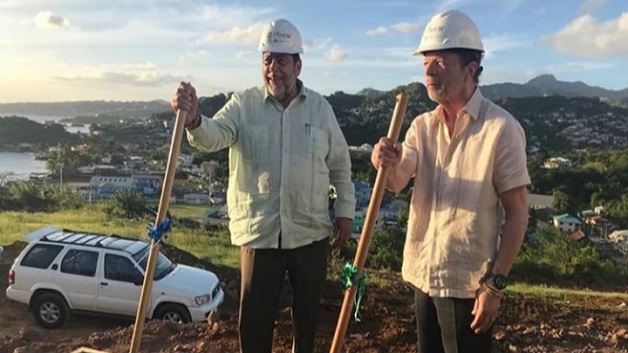 The construction phase of the Royal Mill luxury resort beach club and residences, will see the employment of over 120 Vincentian workers.

This is according to investor and Chief Executive Officer and Co-founder of A&A Capital, Mr. Adem Adem, while speaking at the groundbreaking ceremony yesterday, hosted jointly by Invest SVG and A&A Capital, at the Royal Mill site, formerly Boyea’s residence in Ratho Mill, on the southern tip of mainland St Vincent.

The Government of St. Vincent and the Grenadines is now set to begin construction, and Mr. Adem has expressed delight at the start of the project, adding that the ease of doing business so far in St Vincent has been much better than expected.

Prime Minister, Dr. Ralph Gonsalves, commended the investors for choosing St. Vincent and the Grenadines, outlining ways in which the government has consistently upgraded local infrastructure and human resources, to make investment more rewarding for them and others.

The ceremony climaxed with the unveiling of artistic renderings of the resort complex, preceded by various cultural performances and speeches from A&A executives and government ministers, including area representative for East St. George Camillo Gonsalves, Minister of Tourism Cecil Mc Kie.

The Project is also expected to boast an ultra-modern design, with amenities including an exclusive spa, large pool area and bar, rooftop bar and restaurant and a large gym among other things.

A&A Capital is a private equity firm that makes transformational investments in middle market companies, with the aim to jointly establish a distinctive approach to building stronger businesses.

It was founded in 2016, and two of its executives are Vincentians.

US embargo of Cuba not the solution, says EU

Antigua Parliament gives nod to amendment bill on marijuana use