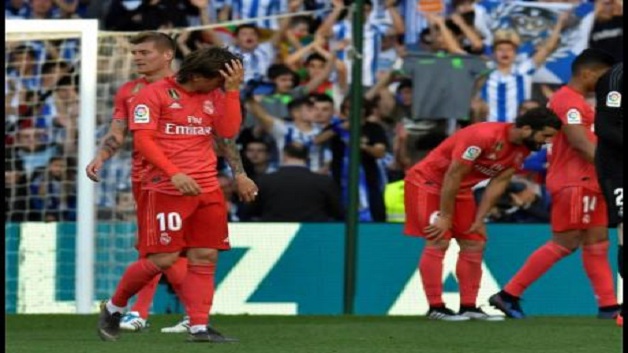 Spanish giants Real Madrid ended third in LaLiga yesterday after a 3-1 loss at Real Sociedad, a result that kept the team winless in five away matches since coach Zinedine Zidane returned. Madrid had not finished outside the top two in the league in consecutive seasons since 1973-74.

Madrid took the lead over Sociedad with Brahim Diaz’s first goal with the club early in the first half, but the hosts rallied to earn the victory.

Meanwhile, Getafe lost 2-0 to Barcelona, dropping out of the qualification places for the UEFA Champions League with one round left in the Spanish league.

The modest southern Madrid club had held on to fourth place for 11 of the last 12 rounds, but it will go into next weekend in fifth place and needing some help to earn their berth in the European competition for the first time in their 36-year history.

Valencia overtook Getafe for fourth place with a 3-1 home win against Alaves. The teams are level on 5+6328 points, but Valencia is ahead on the head-to-head tiebreaker.

Sixth-placed Sevilla still have a chance to earn the final Champions League spot after a 1-1 draw at Atlético Madrid.