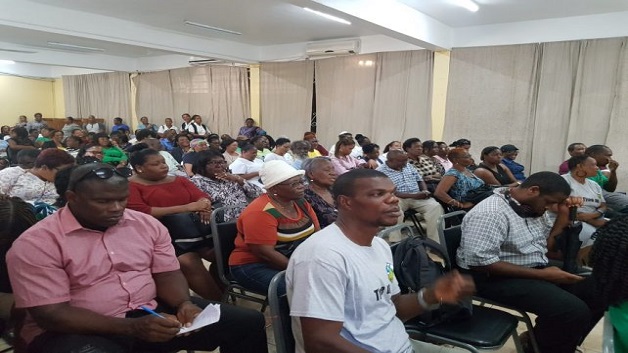 Public officers have been advised to stay home today and tomorrow as the Dominica Public Service Union (DPSU) embarks on industrial action over salary negotiations with the government.

Speaking to reporters after the meeting, General Secretary Thomas Letang would not confirm or deny that decision.

However, Dominica News Online (DNO) was able to independently confirm that the decision was taken on Tuesday afternoon at a DPSU meeting which was held to update members on the status of salary negotiators.

The DPSU said last week that it is not satisfied with the pace at which salary negotiations with the government, is progressing after five meetings.

The mood was one of defiance and protest when public officers gathered at the Dominica Public Service Union (DPSU) to hear from their executive and chart the way forward on salary negotiations.

General Secretary of the DPSU Thomas Letang and his executive have been in a battle with the government over salary increase and other benefits for public officers and revealed that the government’s offer for the triennium under negotiation is “zero, zero, and zero” which the union flatly rejected.

Venezuela to hold landmark vote as it seeks to end crisis