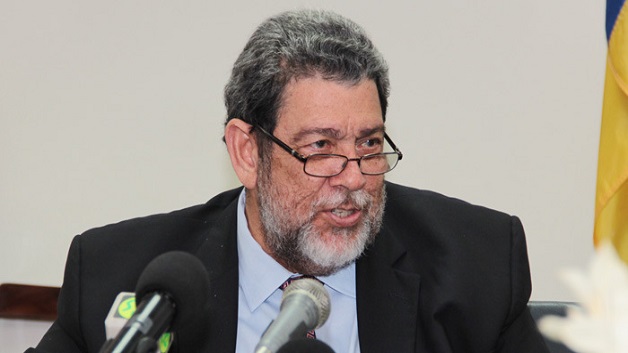 Prior to attending the 29th Inter-sessional meeting of CARICOM Heads of Government in Haiti in February, the Monetary Council held a dinner in St. Kitts for Prime Minister Gonsalves.

At that event, Dr. Gonsalves was presented with a plaque in honor of his contribution towards work on the Prime-ministerial subcommittee addressing the British American Insurance Company (BAICO) and Colonial Life Insurance Company (CLICO) Insurance matter in the sub-region.

Speaking to reporters at a press conference on Tuesday March 13, 2018, Dr. Gonsalves expressed appreciation to the Monetary Council for this gesture.

He noted that during his 17 year tenure at the Monetary Council a lot of good work has been done on behalf of the people of the Eastern Caribbean Currency Union (ECCU).

Over the years, the Eastern Caribbean Currency has been pegged to the US dollar at a fixed rate of EC $2.70.

And Prime Minister Gonsalves noted that during his tenure at the Monetary Council, the backing ratio of the Eastern Caribbean (EC) dollar to the United States (US) dollar remained high up in the 90 percentile.

He explained that the legal limit is 60 per cent foreign reserves to back the EC dollar, while the administrative limit is 80 per cent.

Dr. Gonsalves said the Monetary Council has been very strong in maintaining a stable monetary system, which provides for a stable currency which is an important bulwark/corner stone of economic strength and resilience and sustainability.

The EC dollar is the official currency for Anguilla, Antigua and Barbuda, Dominica, Grenada, St. Kitts, St. Vincent and the Grenadines, St. Lucia and Dominica.